2018 will be another busy, intense and unpredictable year in Parliament – everything from a possible impeachment to legislative battles to investigations to big-picture policy debates and government performance. Here are some predictions of the main stories that will dominate the headlines this year. However, there are two qualifications: this is not an exhaustive list and all can be overtaken by unscheduled debates, statements and events.

There is no gentle introduction to the parliamentary year as MPs deal with two major issues from the outset.

First, the National Assembly Rules Subcommittee has to draft Rules to give effect to the Constitutional Court judgement for the Assembly to establish adequate process to deal with Section 89 of the Constitution – removal of a President from office. The Constitutional Court ruled that this be done without delay. In a majority judgement, the Court said that a prerequisite for the removal of the President is the holding of a factual inquiry into whether there has been serious violation of the Constitution or law, serious misconduct or the inability to perform the function of office – as outlined in Section 89(1). In their preliminary deliberations, MPs discussed how to prevent the fact-finding initial stage of the process being impeded by majoritarianism and agreed that mechanisms must be put in place to mitigate this. The opposition will be eager to use these new impeachment rules but they are unlikely to have the opportunity to do so as President Zuma is to be asked by his own party to leave office, probably before these rules are even finalised. Taking everything into account, the National Assembly is likely to appoint a new President.

The other immediate priority is the resumption of the State Capture inquiry. Last year, the Chairperson of Committees, Cedric Frolick, directed four Committees to "urgently probe" allegations of state capture involving Cabinet Ministers. While the Public Enterprises Committee – tasked with investigating Eskom - has seen dramatic testimony and explosive revelations, the other three committees have made slow progress. During the parliamentary recess, there have been big developments that will have some bearing on the inquiries: the President has announced the establishment of a judicial commission to investigate state capture; the Eskom board has been suspended and the NPA's Asset Forfeiture Unit has started obtaining court orders to freeze assets in several of the 17 state capture cases it is investigating.

It's not hard to predict this one. A big feature of the Fifth Parliament has been the acrimony and tension between the ruling party and opposition parties with finger-pointing, squabbles, brinkmanship and jousting.

This is likely to escalate as parties try to one-up each other to win public support. In the past few years, the State of the Nation Address has set the tone for the rest of the year: parties have either walked out or been thrown out of the event. Who gives the Address on 8 February will be key.

There are 41 bills in Parliament and it is anticipated that a number of them will be finalised in the first term.

Many departments have a backlog of delayed draft legislation that needs to be introduced into Parliament to avoid the end-of-the-Fifth-Term crunch so lawmakers will be doing a lot of heavy legislative lifting this year. The Public Investment Corporation Amendment Bill is the first of the new Bills to be lodged in 2018. Other legislation in the pipeline includes the Regulation of Landholdings Bill, Basic Education Laws Amendment Bill and Prevention and Combating of Hate Crimes and Hate Speech Bill.

The legislature will finalise changes to the Money Bills Amendment Procedure and Related Matters Act. Every year, legislators and civil society complain during the budget process that the timeframes are very short and that meaningful engagement is not possible. The review will look specifically into the time frames and sequencing associated with the money bills, and the parliamentary procedures related to them.

Parliament has built its capacity to initiate and develop legislation. Committee Bills are no longer a rarity. It’s become a trend and we can expect to see more of this activism in 2018. At the same time, more private legislation tabled by Members of Parliament is no longer a possibility but is expected.

The National Assembly Programme Committee requested Parliament’s Constitutional and Legal Services Office (CLSO) to identify Acts enacted prior to 1994 which are still on the statute book. The purpose of this was to identify legislation that is potentially offensive or that contains discriminatory language, for repeal or amendment. Over 1000 pieces of legislation were found to be in this category. It was agreed that each piece of legislation will be referred to the relevant portfolio committee and its support staff will liaise with the departments affected to ensure it is repealed or amended. Committees will begin wading through this in 2018. 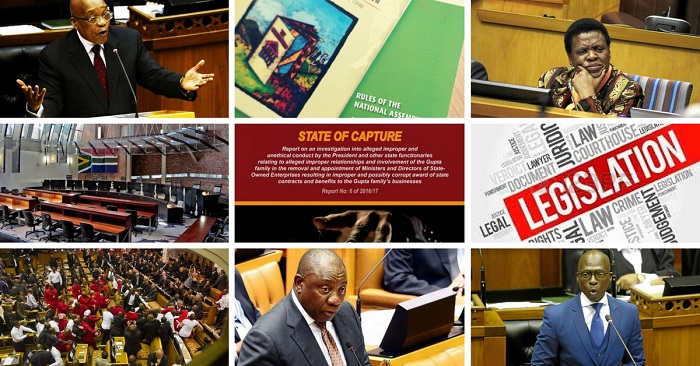 Over the last few years, Parliament has been a regular visitor to the courts – either as a complainant or a defendant. The scorecard makes dismal reading for the legislature as it has been on the losing side in the majority of cases. And with each loss, the bench has delivered a stinging and damaging rebuke to Parliament. This trend will in all likelihood continue given how divided, contested and charged our politics are.

Truancy has remained a constant concern despite repeated demands to address this. It is a waste of taxpayers’ money and important business is delayed due to this. The opposition has been critical of the Executive for missing Question Time. The Deputy President has been working hard to address this and it will be interesting to track if there are improvements.

Committees are also often frustrated when Ministers or their Deputies fail to pitch up for key meetings. There is little to separate the attendance of ANC and DA MPs with both averaging around the mid 70s at committee meetings. While this is respectable, there is room for improvement. The EFF is lagging behind at 44%. This is a pity as they add value and a different perspective when they participate in proceedings.

Last year, Parliament established a committee to be a watchdog over Ministers who do not answer written questions. Each quarter this Subcommittee will engage the relevant Ministers on the reasons for the questions being unanswered. The Subcommittee will report its findings to the Rules Committee and any recommendations to address identified challenges or concerns. These would be reported to the National Assembly which could lead to censure of the Minister.

The IFP has been pushing Parliament to create a committee that will oversee the Office of the President.

We can expect to hear more on both of these items this year.

Much of the work of Parliament takes place in committees, which are the lifeblood of the institution. They oversee executive action and examine government policy, proposed new laws and wider topics like the budget and the economy in detail. Each year there are more than 1000 committee meetings. This year committees are set to deal with pressing issues, including the water crisis, SOE performance, jobs and the economy, free higher education, food security, municipal debt, climate change, gender based violence and violent crime, media appeals tribunal, decriminalisation of sex work, and the nuclear build programme to name a few.

The Portfolio Committee on Trade and Industry and Standing Committee on Finance have resolved to undertake important work on localisation, local public procurement and transformation of the financial sector.

After many years of inaction, Parliament dusted off the Asmal Report and asked the public to comment on the feasibility of establishing a “Single Human Rights Body”. Proponents argue that the main advantages to the establishment of a “Single Human Rights Body” are: the avoidance of duplication of effort; the administrative efficiency and effective use of resources and greater accessibility and co-ordinated approach to public awareness of the Bill of Rights. The Office on Institutions Supporting Democracy in Parliament has been tasked to undertake the study and is expected to report on its findings this year.

Plenary is the arena where most of the theatrics and fireworks happen. It is also the space where matters of urgent national importance are debated and where the President and his Executive are held to account.

With the elections looming large in 2019, political parties are going all out to win over voters. With this in mind we can expect MPs to use every possible parliamentary occasion - question times, members’ statements, debates, whatever – to target hot button electoral issues and try to score points over their opponents.

There will be new faces in Parliament as a result of resignations and deaths. Looking ahead to 2019 elections, there will be redeployments as parties prepare to do battle.

Parliament will publish the 2017 Register of Members’ Interest. It is always interesting to comb through the data to see who owns what, how many gifts they receive and from whom and how many shares and directorships they have.

Meanwhile, the legislature’s first term is packed with activities. Some of the highlights include oversight and legislative work, SONA and the ensuing debate, questions to the Executive, the Budget Speech, and committee work.