Interview in writing with Makhosi B. Khoza 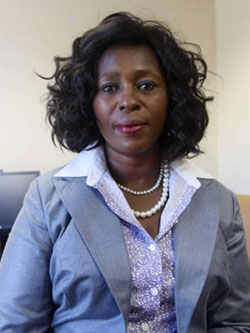 Q: Comment on the role you played in opening up key appointments to the public – did it free the process from political pressure?

A: I had the honour of chairing the Ad Hoc Committee tasked with appointing a new Public Protector. In this role, I got to witness the hostility towards civil society first hand. During each stage of the process, I had to report to the African National Congress (ANC) headquarters, Luthuli House. They directed the process behind the scenes. There was serious push back to opening the process to the members of the public and civil society formations. Repeatedly, I was told to account to the organization (ruling party) as South Africa does not have directly elected Members of Parliament (MPs) as all come through their political party structures. Basically, I was at the mercy of the political party, and the South African people and the Constitution took a back seat.

Luthuli House even sanctioned who made it to the short-list. There was a preferred candidate who unfortunately was not the favourite of the public. The media was also fixated on the process exposing some scandals associated with their preferred candidate. It was a very challenging process. The Head of State was clearly unhappy with the directives of the Luthuli House leadership collective. When I reported to them that none of the opposition parties were in favour of the Luthuli House choice, the Head of State rejoiced. The Inkatha Freedom Party Member of Parliament pushed hard for the short-listing of the now incumbent Public Protector. The Democratic Alliance (DA) raised concerns about her association with the secret service right at the end of the process when nothing could be done. They also had their own preferred candidate. Though one understood their concerns as one had a first-hand experience with the Head of State who could not contain his excitement when one reported that the public and all the other opposition parties supported the current incumbent as the preferred candidate except for the DA. The other members of the top six were visibly lost when the Head of State celebrated.


Q: How do you feel about the Committee’s final recommendation?

A: The performance of the current incumbent raises serious questions about her capacity, independence and judgement. There was nothing one could do. There is a process for removal. This option was rejected by the ANC. The process was undoubtedly open and fair. All political parties were proportionally represented. Members of the public participated in an unprecedented way. The process that appointed Adv Thuli Madonsela had no more than 15 applicants, yet, the 2016 process had over 100 applicants. People had witnessed the power of the Public Protector in Adv Madonsela. Democracy was undoubtedly at work. However, a captured ruling party and nation-state riddled with corruption at all levels has the capacity of infiltrating and manipulating even the most transparent and fair processes.

Q: What are your impressions of the fifth Parliament?

A: In retrospect, a fusion of despondency, gratification and optimism overwhelms my reflections on the fifth Parliament. Despite their often racially-toned political posture and outdated Marxism inspired populist rhetoric, the 6% young and ordinary new Members of Parliament (MPs) are the main highlight of the fifth Parliament. They undoubtedly disrupted the European construct of an “honourable Member of Parliament”. Their spectacular and ostentatious launch in the corridors of power draped in blood-red working-class gear admittedly contributed in making Parliament more identifiable with the masses of South Africa. None could ignore them. Paradoxically, it also perpetuates historical stereotypes that seeks to synonymise black Africans with ‘unruly behavior, domestic worker, garden-boy, cheap and exploited manual labour.’

The largely aged and visually tired ruling-party MPs are no match to this fresh and vibrant energy. Armed with university eloquence, mastery of the written-word and rawness of street language punctuated with astonishingly disruptive aggression reduced the once-upon-time giant into a lame duck. Though numbers matter, the effectiveness of democracy is not in quantities as the Economic Freedom Fighters taught us. It is about distinction, clear mission and constituency free from any form of opacity. Their expropriation of land without compensation narrative was clear, crisp and consistent. The post-apartheid mission vacuum of the ruling party was exposed. The fifth Parliament demonstrated how far 6% of political power could go. To a large extent it defined and relegated the 62% of black, green and gold to captives in high chairs and dwarfed the 22% of royal blue official opposition to rapidly fading obscurity. Every attempt to reinvent the blue crumbles into small particles of clumsiness and inelegance.

Q: What are your feelings about South Africa’s future?

A: My optimism stems from the collective power of South Africans. When they rose in April 2017 demanding the removal of a disgraceful President, one knew not all is lost. One’s sanguinity emanates from the Constitution. The current processes underway such as the State Capture Commission, the Public Investment Corporation (PIC) Inquiry and National Prosecuting Authority (NPA) inquiries suggest that South African democracy can be restored.

South Africa’s future is bright. We must be optimistically vigilant. Pessimism has never produced anything progressive. All South Africans have a national duty to defend democracy, moral conscience and shared prosperity. Decolonise, Reconstruct and Reconcile (DRR) should be the new mission of this ailing nation. As Martin Luther King Junior puts it:

Q: What are the lessons you would like South Africans to take to heart?

A: A learning and knowledgeable nation safeguards its public interests. The biggest threat to South African democracy is its largest number of citizens remaining entrapped in intergenerational poverty and hopelessness. The second major risk is the failure to deal decisively with corruption in the African continent as a whole. South Africa does not need a wall on its borders. It needs clean governance not only in South Africa but the entire African continent. Logic therefore suggests that the Sixth Parliament should focus on quality education and clean governance. These pillars are the prerequisite for a vibrant democratic and prosperous nation.

Public participation can never be meaningful if the education system continues to produce mentally enslaved citizens. The victorious statue of Louis Botha on his majestic horse welcomes all to the powerhouse of the Republic of South Africa. In his shadow is an awkward looking armless and legless bronze sculpture of Dr Nelson Mandela randomly rested on a mounted stone. At the only other access to Parliament triumphantly towers a statuette of Queen Victoria wielding her feast high between the sky and the ground claiming everything under the blue skies of the Republic. Her majesty appears to be paying a special tribute to her loyal subjects who delivered the African treasures to develop their home country for many generations to come irrespective of who holds the political power. Many centuries before colonialism, the scramble of Africa and the discovery of precious mineral resources in South Africa, a Tunisian born philosopher, Ibn Kaldun appears to have foreseen the future events of a mentally enslaved nation, he said:

The fifth Republic of South African Parliament attests to the complexities of transition from a liberation movement to a governing party. The political theatrics of this recent period with pandemonium in the House awakened Dr Hendrik Verwoerd’s spirit which continues to haunt the corridors of power especially the old National Assembly where he met his fate on the 6 September 1966.

It is not only the unfolding discourse in the new National Assembly and committee rooms that speak volumes about South Africa’s colonial and apartheid legacy, but also the visuals and actual experience. From language to the physical environment – colonial hegemony reigns. Though black African languages account for 79% of the South African population, according to Statistics South Africa 2011, none feature in any significant measure as instruments of participation in policy processes and intellectual discourse. It is not an exaggeration to conclude that those who govern the land do not recognize the extent of their psychological damage.

“The present predicament of Africa is often not a matter of personal choice: they arise from a historical situation. Their solutions are not so much a matter of personal decision as that of a fundamental social transformation of the structures of our society starting with a real break with imperialism and its internal allies. Imperialism and comprador alliances in Africa can never develop the continent.” Ngugi wa Thiong’o, Decolonising the mind: The Politics of Language in African Literature.

Despite the intricacy and paradox presented by imperialism, there is no excuse for short-termism. There can never be a justification for corruption. We need to deal decisively with mental slavery that manifests itself in corrupt tendencies. Psychological defeat is a silent saboteur, which covertly despises all that is black African. It alienates one from one's own language, logic, intelligence and moral conscience. It breeds an intellectually stunted nation that depends on the state to meet its basic requirements such as putting food on the table. How do we explain the governing party’s failure to address the crisis of black African languages in South Africa? Although numerous studies point to language as a barrier to access information, acquire knowledge and opportunities, black Africans are compelled to study in English with no translation of what they are studying in their own languages. English has become a measure of intelligence in South Africa inadvertently classifying more than 65% of its population as unintelligent beings because they cannot speak it. Drawing our attention to the critical importance of one’s mother tongue in moulding one’s psyche and relationship with the world, Franz Fanon had this to say:

“I ascribe a basic importance to the phenomenon of language. To speak means to be in a position to use certain syntax, to grasp the morphology of this or that language, but it means above all to assume a culture, to support the weight of a civilization….

A man who has a language consequently possesses the world expressed and implied by that language.” Franz Fanon, Black Skin White Mask

The public participation process excludes the majority of South Africans on linguistic grounds. Unashamedly, the failure of Parliament to effectively address the language barrier crisis could be best defined as grotesque and curious. One begs to ask, is democracy a side show of the well-to do and consensus of those with decorated struggle credentials? It is as though South Africa owes certain families for the sacrifices they made during the struggle for democracy.

Governing from a position of lack, uncontrollable greed, crass materialism, high tolerance levels of corruption, populism and absence of clear mission, in post-apartheid South Africa, are all factors that constitute the undoing of all liberation movements in Africa. None learns from the others’ mistakes. It is evident that none of the African liberation movements fully appreciate the extent of their psychological conquest.

Tragically, centuries-long and intergenerational deprivation makes most of our leaders, entrusted with the responsibility of governing, prone to short-termism. Ironically, instant-gratification, selfishness and the obsession with the now-and-here moment blind their visions of real and sustainable wealth for many of their future generations.


Makhosi Khoza holds a PhD in Public Administration and was an ANC Member of the Fifth Parliament until she resigned in protest in September 2017.