In less than two weeks’ time, South Africans will be going to the polls to elect public representatives to sit in the 257 municipal councils across the country.

The latest (2019/20) audit findings as presented by Auditor-General Tsakani Maluleke in June this year painted a gloomy picture on the financial state and administration of municipalities.

Audit outcomes at a glance 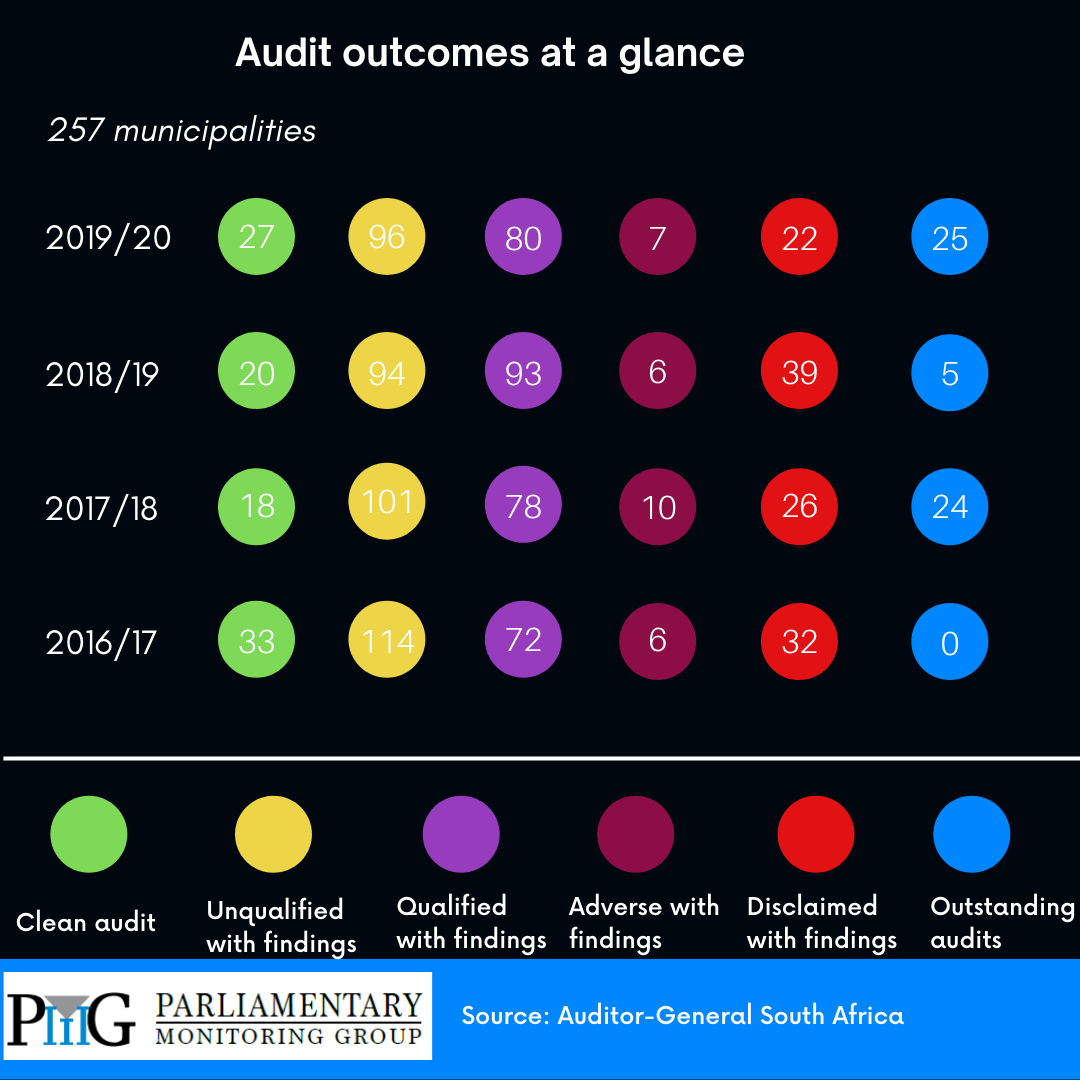 The trend of audit outcomes since the last municipal elections in 2016 shows a lack of any significant improvement.

When presenting her report, AG Maluleke said: “Local government finances continued to be under severe pressure as a result of non-payment by municipal debtors, poor budgeting practices and ineffective financial management. The financial position of just over a quarter of municipalities is so dire that there is significant doubt that they will be able to continue meeting their obligations in the near future. Almost half of the municipalities are exhibiting indicators of financial strain, including low debt recovery, an inability to pay creditors and operating deficits.”

Other notable findings were:

Further, in late August, the Department of Cooperative Governance and Traditional Affairs (COGTA) presented a report to the Portfolio Committee on COGTA showing that the vast majority of municipalities are in dire financial straits. The Department categorised the country’s major municipalities into four main categories: High-risk dysfunctional; Medium risk; Low risk; Stable. These categories were further considered alongside a number of indicators including their political situation, the state of their governance, their financial management and the level of service delivery.

What MPs had to say on the state of municipalities.

Upon presentation of the audit outcomes by the AG in June, MPs pointed out the report revealed grand theft, grand corruption and grand mismanagement. Members said that lack of accountability for mismanagement of public funds was the single biggest problem in government. They indicated unless something significant was done as a matter of urgency about financial management, the country was finished.

MPs proposed a roadmap to deal with the challenges in municipalities and emphasised that institutions from the legislative, executive and accounting spheres needed to work collaboratively to improve the administration within municipalities as well as examine the political forces at play.

** AGSA can express one of the following audit opinions:

Clean audit outcome: the financial statements are free from material misstatements and there are no material findings on reporting on performance objectives or non-compliance with legislation.

Unqualified audit with findings: the financial statements contain no material misstatements but findings have been raised on either reporting on predetermined objectives or non-compliance with legislation, or both these aspects.