It’s one of the most important speeches that the President delivers in any year. With a prime time tv audience, it is a tremendous PR opportunity for the President to simultaneously lay out his agenda and reassure doubters - both local and foreign.

There are a few safe bets for tonight's address: There will be some applause lines, the odd political jibe, some tepid and obligatory clapping and name checking guests in the gallery. Don't bother to look for inspiring rhetoric and poetic speech – if it does happen it will be in small doses. This speech is not designed for that. It is mostly dull, sprawling and a laundry-list of the administration's legislative and programmatic proposals for the year.

The speech is the result of collaboration among a large number of officials in the government - including policy advisors, researchers and speech writers – and outside advisors and thinkers. Traditionally, the Forum of Director-Generals, the ANC's January 8th Statement, NEC Lekgotla and the Cabinet Lekgotla play a central role in shaping the speech. Meetings are also held with business leaders and labour, which influences the speech. Every government department competes to get their input and projects into the speech.

The speech goes through an evolutionary process – words and ideas are added and removed. The rough drafts are sculpted carefully to ensure that every undertaking is supported by practical considerations including available budget. Despite the weeks of drafting, there is still tinkering and fine-tuning happening up to the last day. 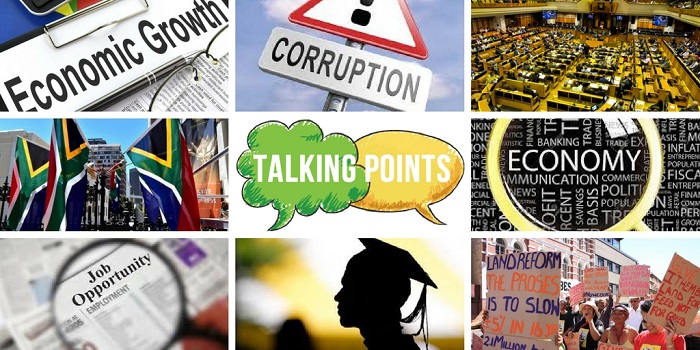 The target audience consists of different constituencies, which includes MPs, citizens, trade unions, business leaders, foreign investors, foreign governments and credit rating agencies. The media, pundits and stakeholder groups, will dissect every word and inflection carefully live and even days after, to make sense of what it all means for particular sectors.

Some argue that too much attention and meaning is ascribed to the speech when it is quickly forgotten by the public. Others point out that it sets the tone for the year. Memorability is probably the best way to measure the success of this type of speech and this is seldom achieved. Either way, the reaction from the gallery, public (via social media, polling), political opponents and the markets will be known instantly and will be a talking point for days after.

Many of the items included in the speech will never be accomplished – several ideas are long-term visions, while some proposals won't be successful or will be implemented progressively. Also, the facts and figures trotted out are not always true and can lack context (Read Africa Check here and here).

What about the main talking points for this year? According to political parties and many experts, the economy is at the top of the list. In a number of statements, government has confirmed that efforts to reignite economic growth and plans to achieve radical socio-economic transformation will feature strongly. Job creation, higher education and land reform and reducing corruption will also be raised sharply.

At the best of times, this is a difficult kind of speech to give. This is even more so in a difficult climate where the challenges are severe and hopes are high. There is a unique challenge this year with the incoming President delivering this speech only a day after being sworn in.

Here are a few tips for President Ramaphosa: