On 1 November, South Africans will go out in numbers to cast their votes to elect public representatives to sit in the 257 municipal councils across the country, comprising eight metropolitan, 44 district and 205 local municipalities.

We glean on legislation governing municipalities.

The Municipal Structures Act provides for an appropriate division of functions and powers between categories of municipality; regulates the internal systems, structures and office-bearers of municipalities; and makes provision for appropriate electoral systems in local government.

The Municipal Properties Act regulates the power of a municipality to value and rate immovable properties located within the boundaries of municipalities. Municipalities derive their power to levy rates from Section 229(1) of the Constitution.

While the framework for provincial and national monitoring and standard setting is set out in the Constitution, the Municipal Systems Act consolidates and elaborates on these functions. Section 108 of the Act in particular, empowers the Minister of Cooperative Governance and Traditional Affairs (COGTA) to establish essential standards and minimum standards for any matter assigned to municipalities.

Cases of unauthorized, irregular, fruitless and wasteful expenditure are a perennial scourge in a number of municipalities across the country. In terms of Section 4(2) of the Act, councils have a duty to use municipal resources in the best interest of local communities. Therefore, municipalities are expected to have in place at all times policies and processes to prevent or curb such expenditures in compliance with this Act.

Notably, a Municipal Systems Act Amendment Bill is currently making its way through Parliament and seeks to amend certain provisions of the Amendment Act which were found to be unconstitutional by the Constitutional Court in 2017.

The MFMA aims to modernise budget, accounting and financial management practices by placing local government finances on a sustainable footing in order to maximise the capacity of municipalities to deliver services to communities. Supported by the annual Division of Revenue Act, this piece of legislation is aligned with the other aforementioned local government legislation and their regulations, to form a coherent local governance package.

While there is general consensus that the MFMA imposes some of the highest standards of financial management anywhere in the world, some critics argue that some of its provisions are too onerous and have actually weakened the public sector.

As far back as 2013, the Department of COGTA expressed intention to table the Intergovernmental, Monitoring, Support and Intervention Bill which has been highlighted as a remedy to many challenges experienced when Section 139 of the Constitution is invoked in relation to municipalities in crisis.

In a July 2021 written reply to a parliamentary question from a DA MP, Minister Dlamini-Zuma indicated the Department was currently conducting wider consultation with stakeholders in provinces and municipalities, before processing the Bill through to Cabinet. It is envisaged that the parliamentary process will commence during the beginning of 2022/2023 financial year.

Municipalities are empowered to pass their own legislation, in the form of by-laws, for particular subject areas. Municipal by-laws form part of the legal foundation for effective service delivery and cooperative communities. These by-laws hold the same power and force as other national and provincial legislation. 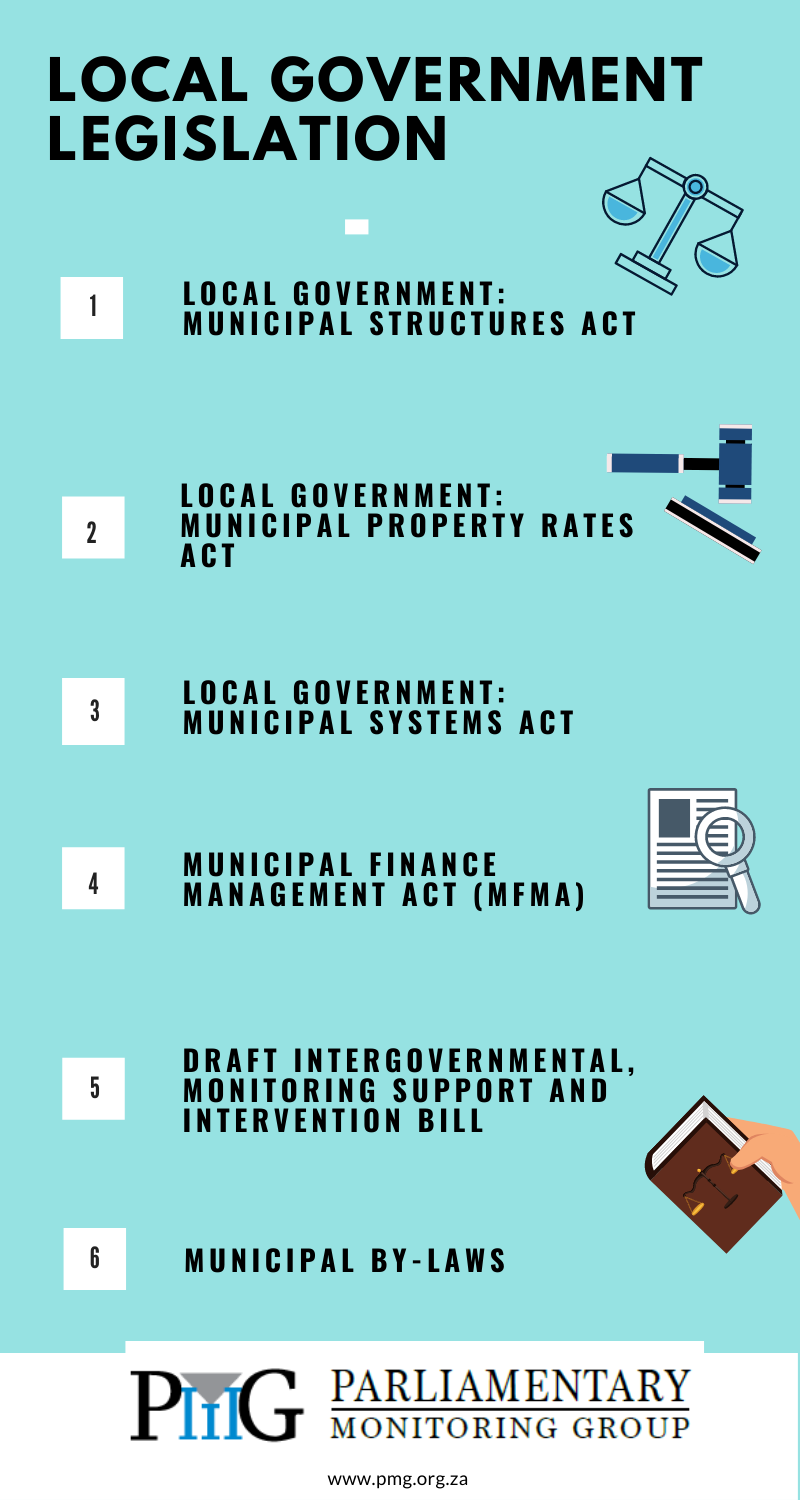